Once upon a time, long before comic conventions were considered pop-culture, WonderCon resided in San Francisco. It was an intimate, fan-friendly show adored by the locals.

When WonderCon announced that they would be taking their ball and moving to Anaheim, I and most of the Bay Area natives were crushed. Initially, we were told that the move would be temporary while Moscone Center renovated its facilities, but that turned out to be poppycock and balderdash as the show firmly replanted its roots in Southern California. From there, it was one untruth after another, and then, they finally announced that the show would remain in Anaheim. From that point forward, WonderCon was dead to me, but over the years, I’ve heard nothing but good things about the show, so I decided to put aside my bitterness and anger to see what all of the hubbub was about.

When we first arrived onsite (after a murderous drive from the Bay Area and an unfortunate speeding ticket), we were pleasantly surprised by the surroundings. It was… beautiful, and a far cry from the dark shadows of Moscone; the difference was light night and day. 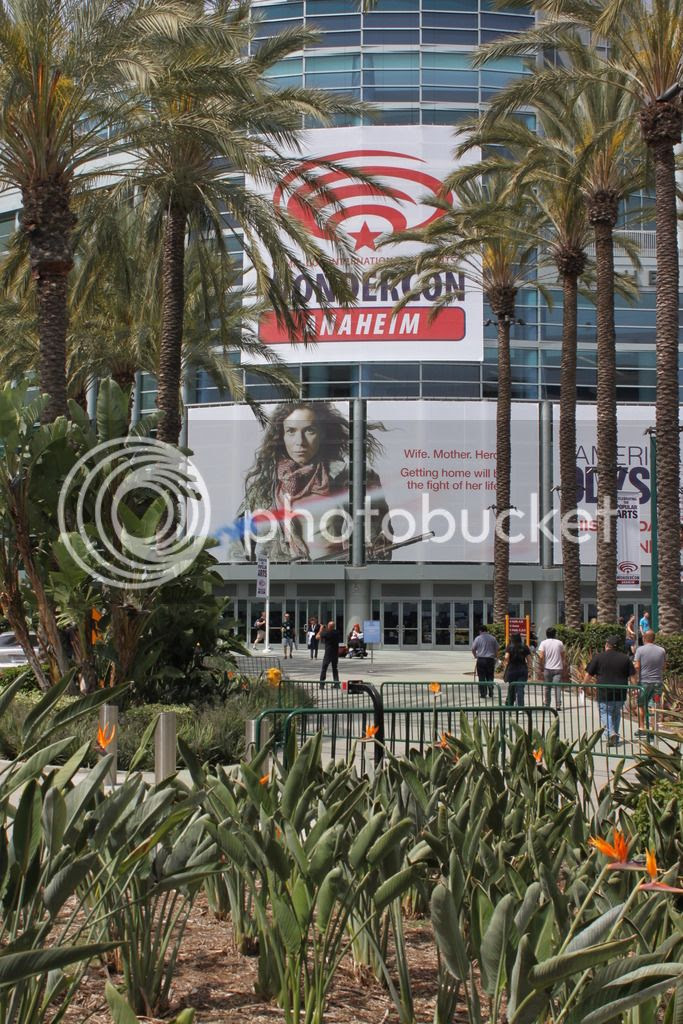 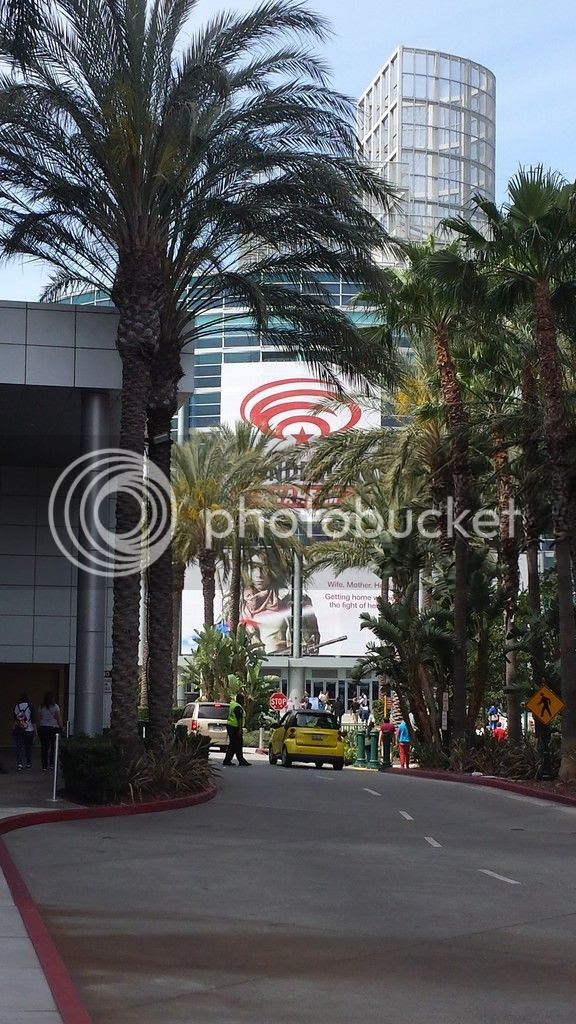 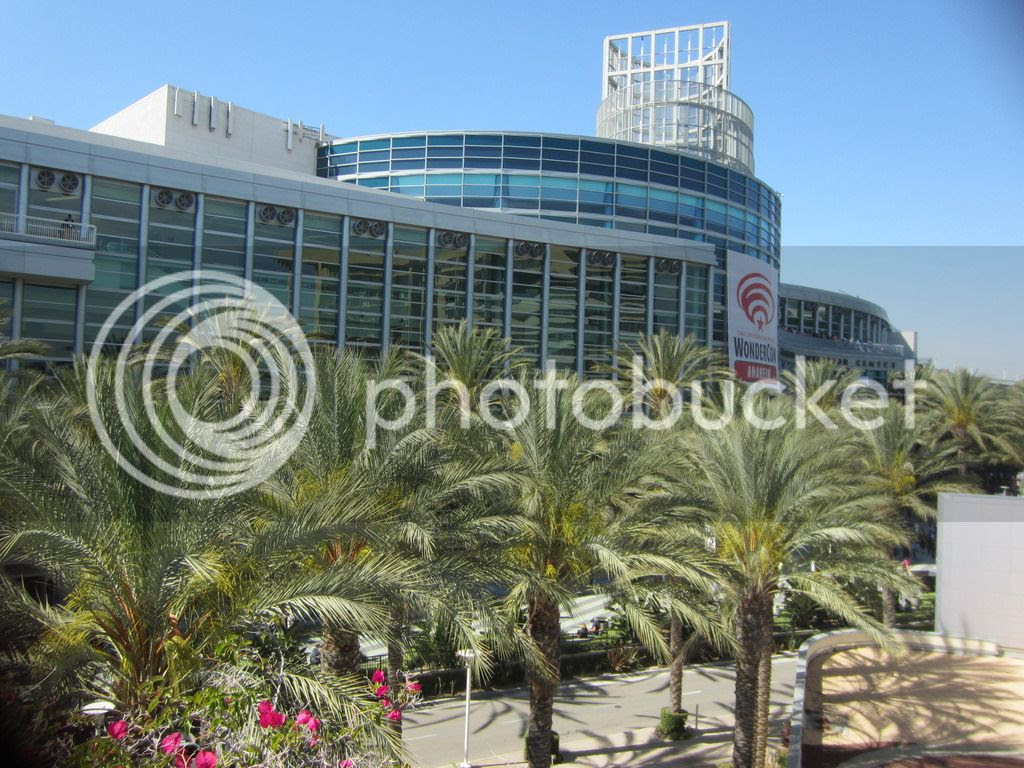 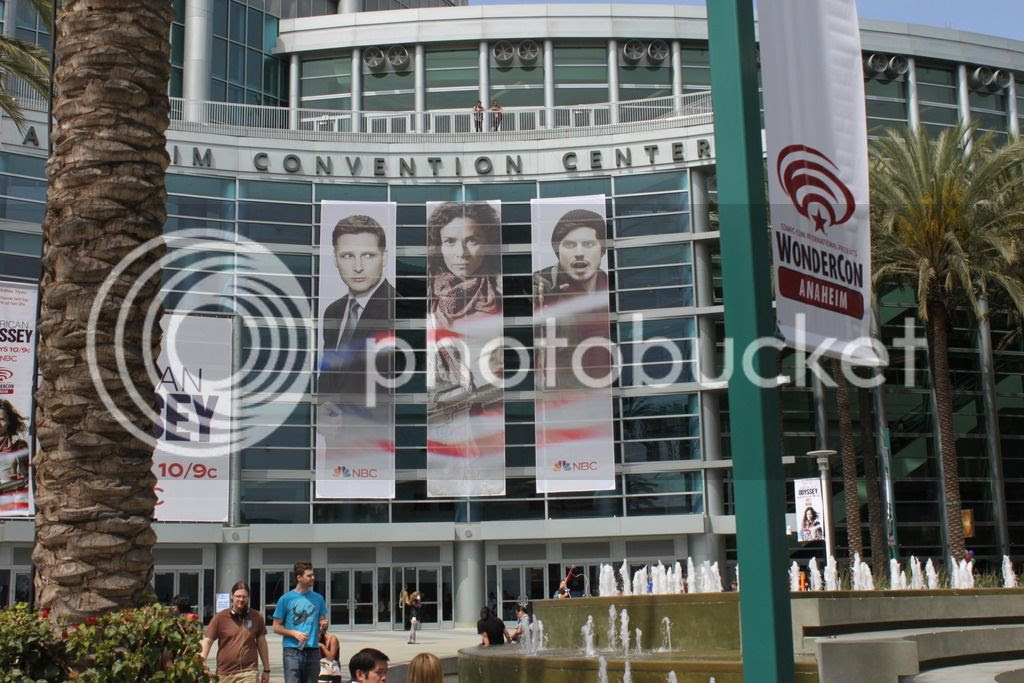 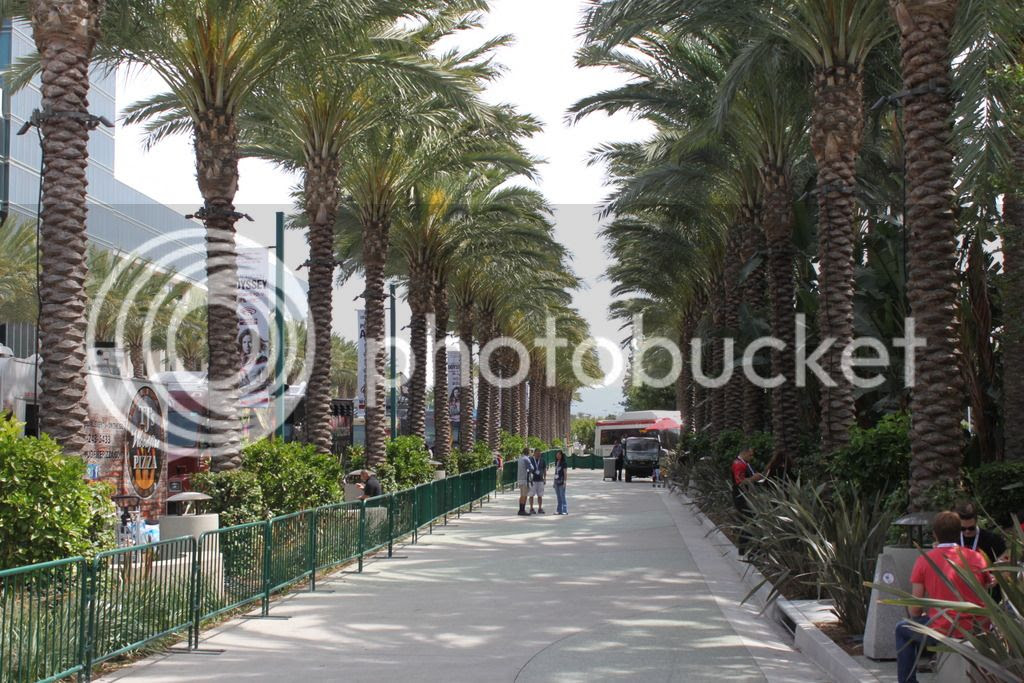 The quad area in front of the Convention center was beautifully landscaped, spacious and a perfect congregating spot for cosplayers all throughout the weekend; it was a great place to hang out, meet people, take photos and absorb the essence of the event. 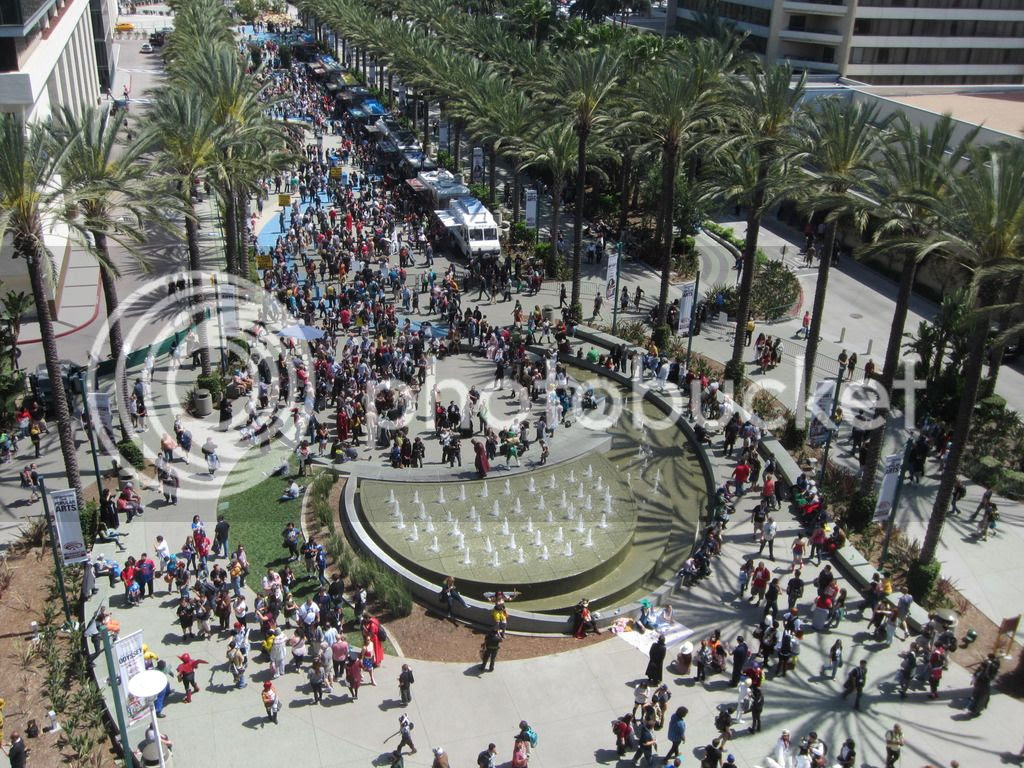 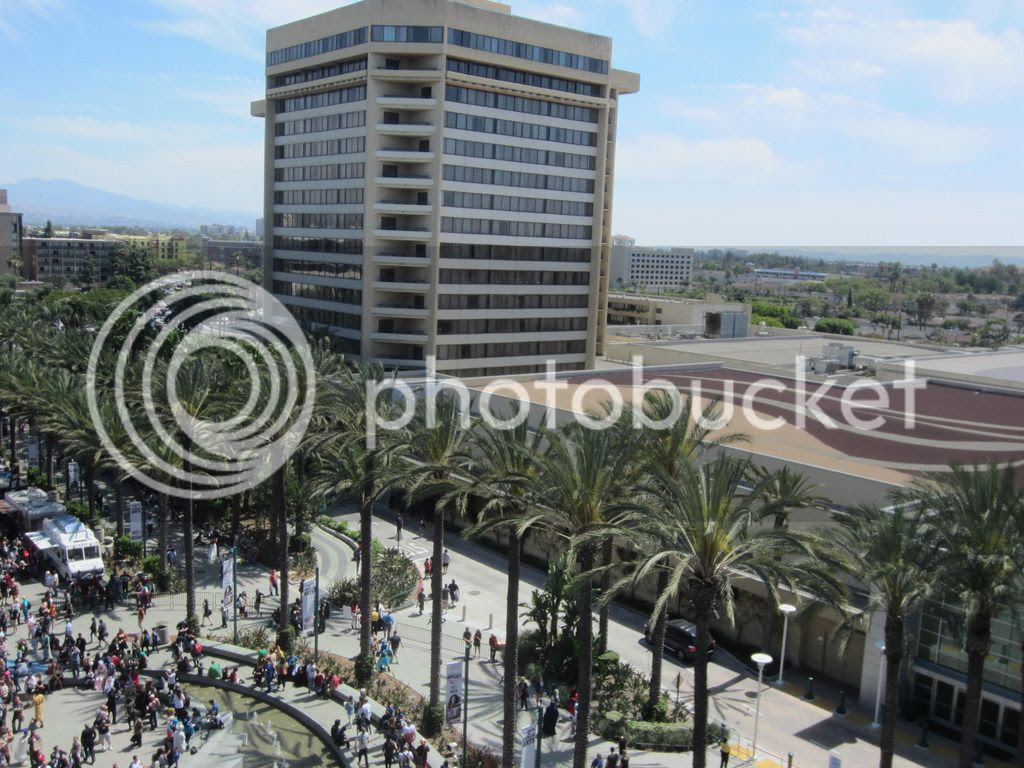 At night, the fountain was magnificently illuminated with brilliant colors and dancing arrangements. 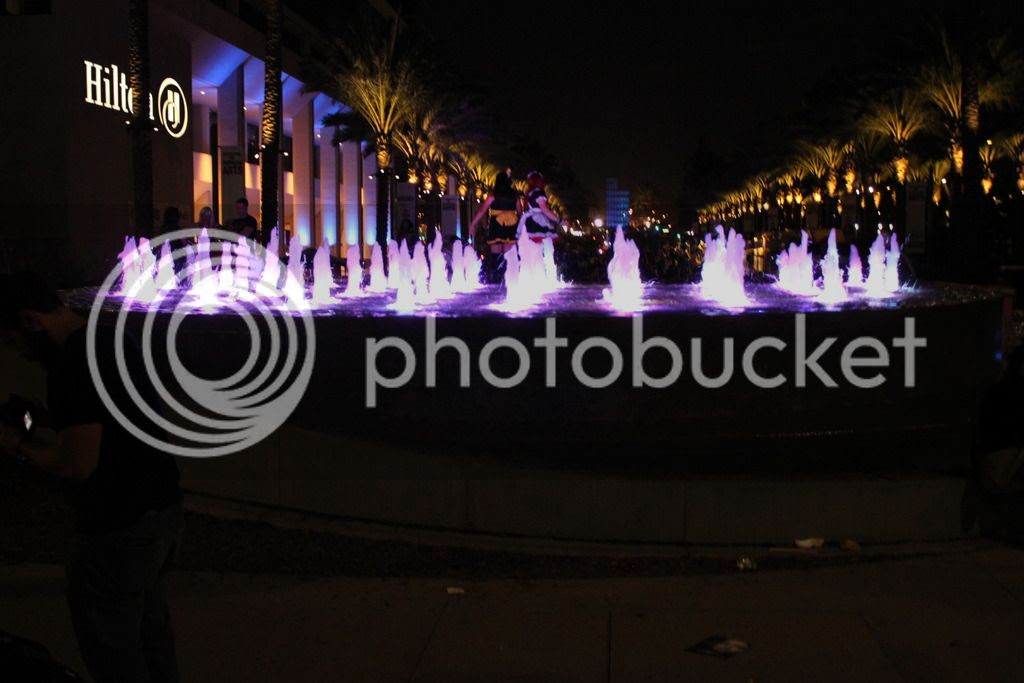 When it comes to these shows, it helps to have a plan; I always have an agenda ready to execute to ensure maximum enjoyment. Day 1 is for book signings, sketches and autographs and browsing the convention floor, and all days thereafter are reserved for cosplay and networking. Even though Friday was an abbreviated day, I got almost everything I wanted done the first day.
Len Wein, one of my favorite Silver Age Green Lantern storytellers was in attendance, so I had some Classic, iconic Green Lantern books for him to sign... at $5 each. 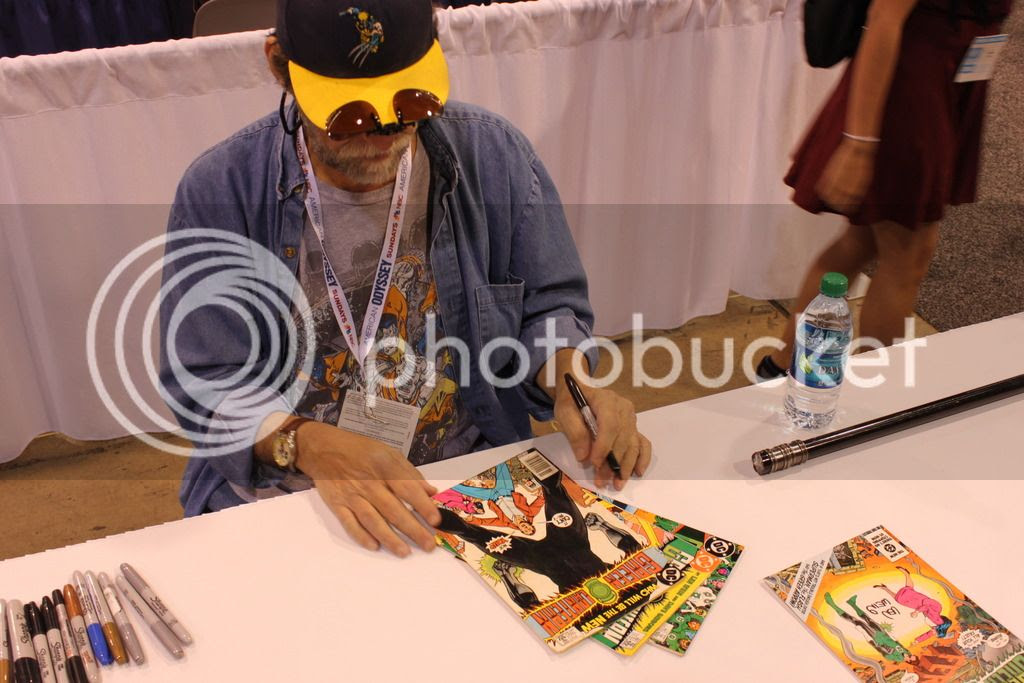 At least the photo I got with him was free. It was great talking GL with him. 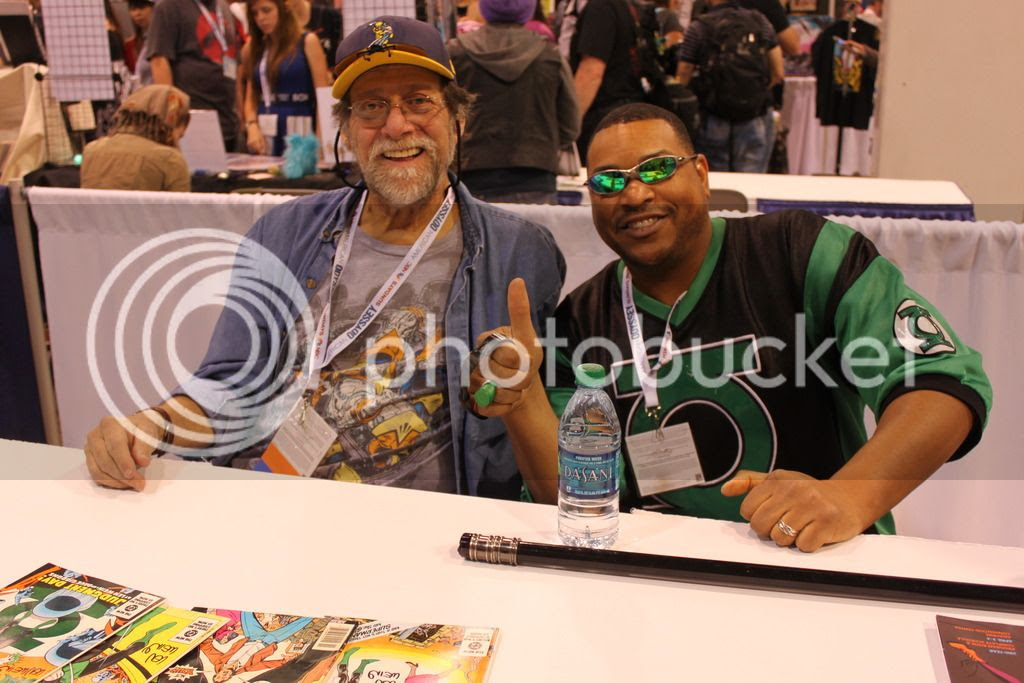 I had some books signed by Sinestro writer, Cullen Bunn, and got to talk all things Green Lantern with him. Too bad he wouldn't divulge what happens with Natu during the Lost Army arc. Hey, I tried. 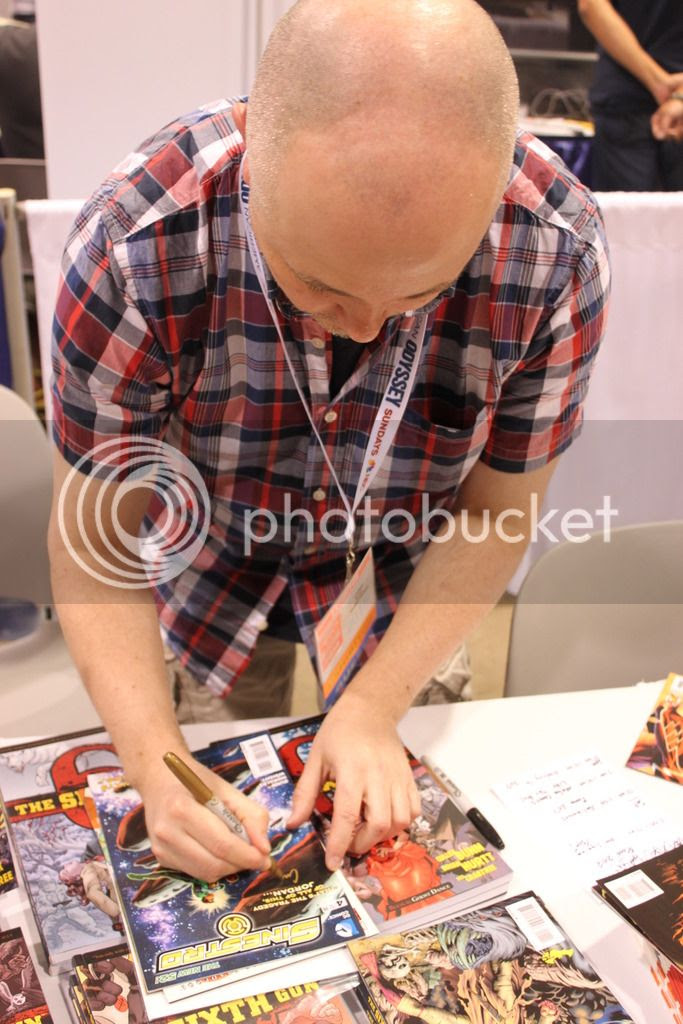 I also got Darwyn Cooke to sign some Green Lantern variant issues. I tried to get a sketch from him, but he was booked solid. 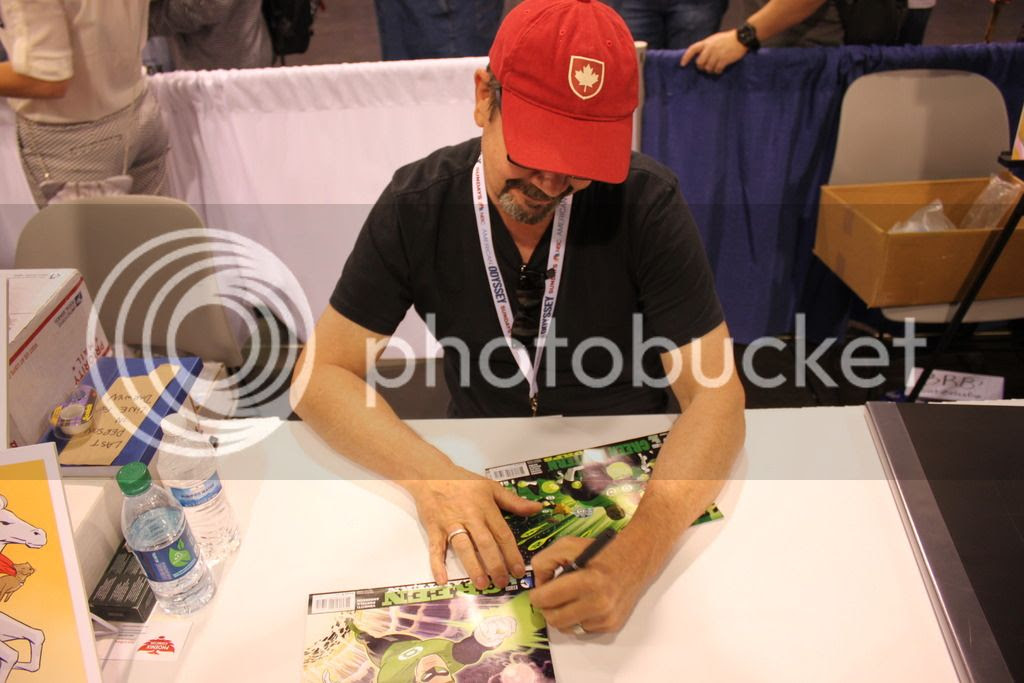 Steve Epting was in the house, so I got him to sign my Fantastic 3 issue. 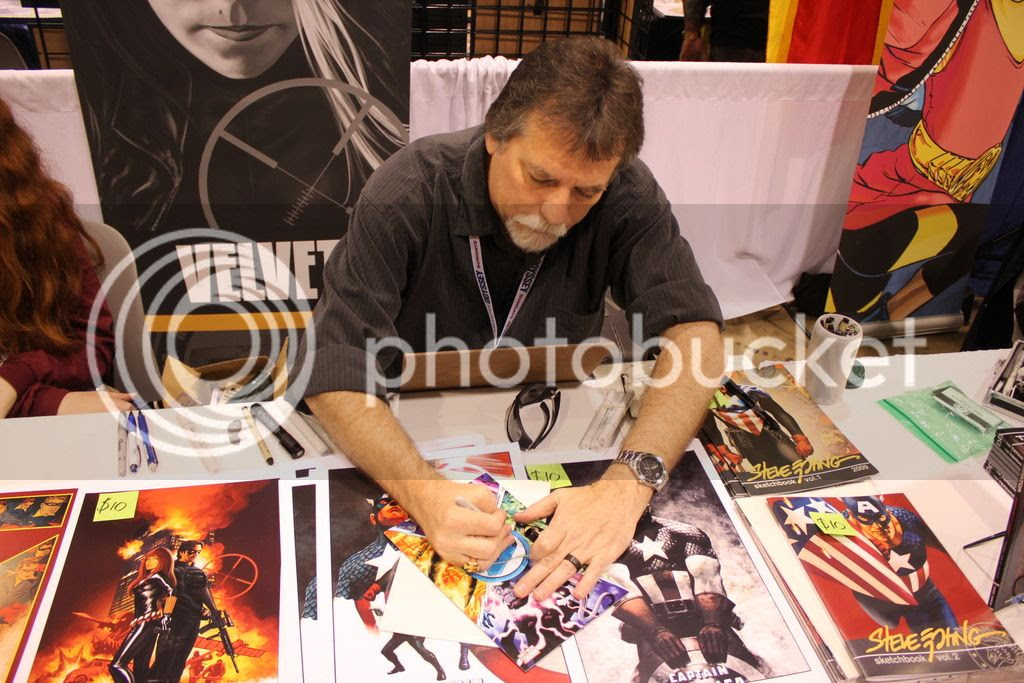 I got Dan Jergens to sign my Future's End books. 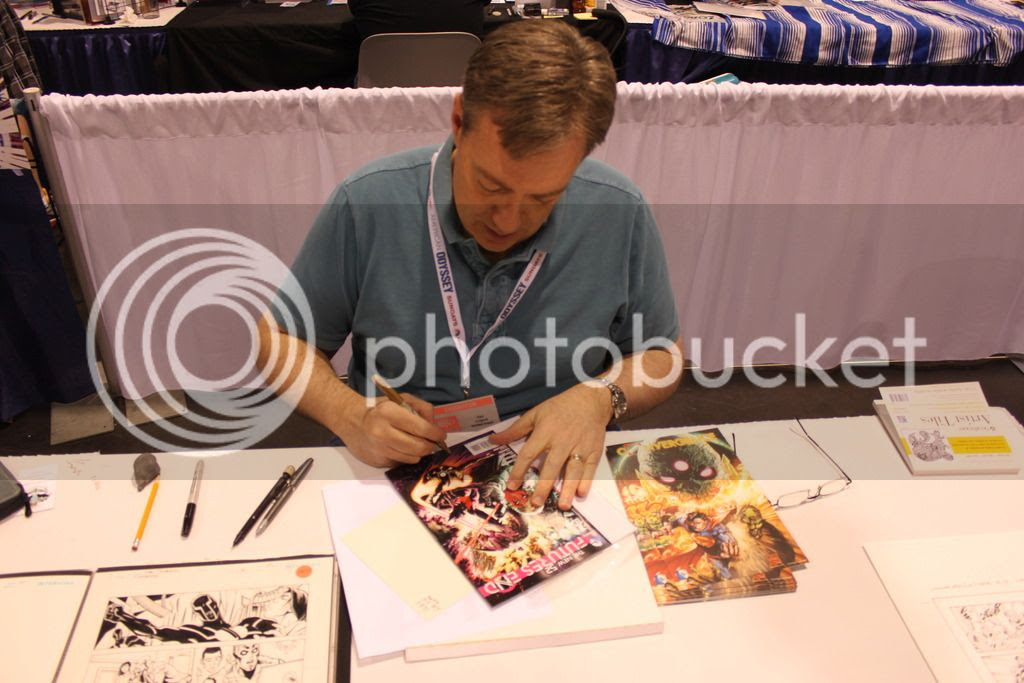 I was fortunate enough to have Jae Lee and Greg Pak sign my Batman/Superman #1. 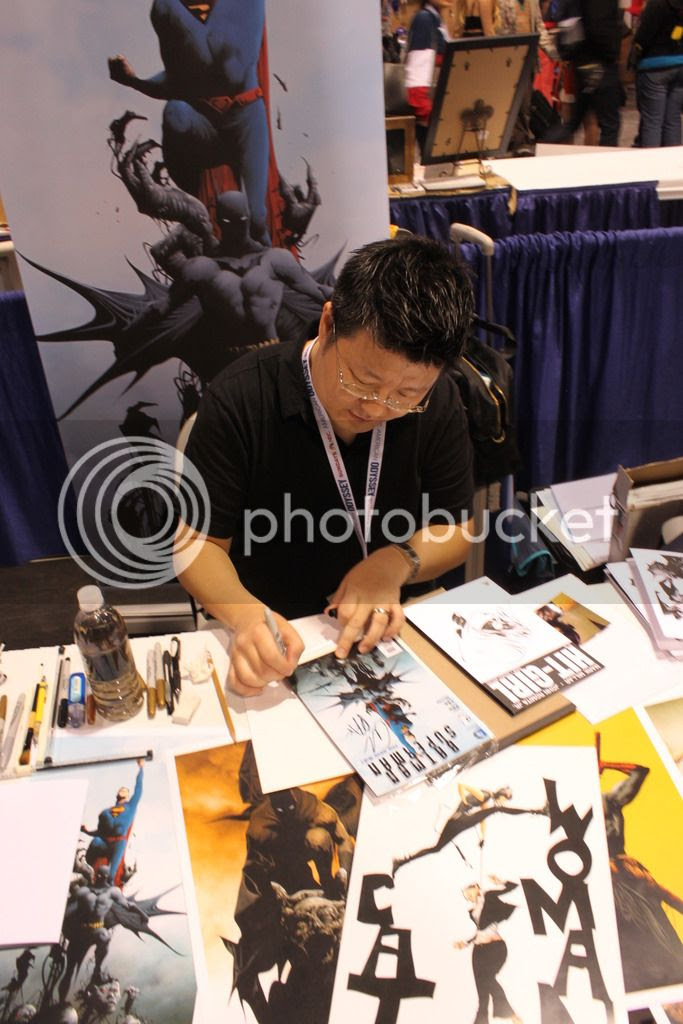 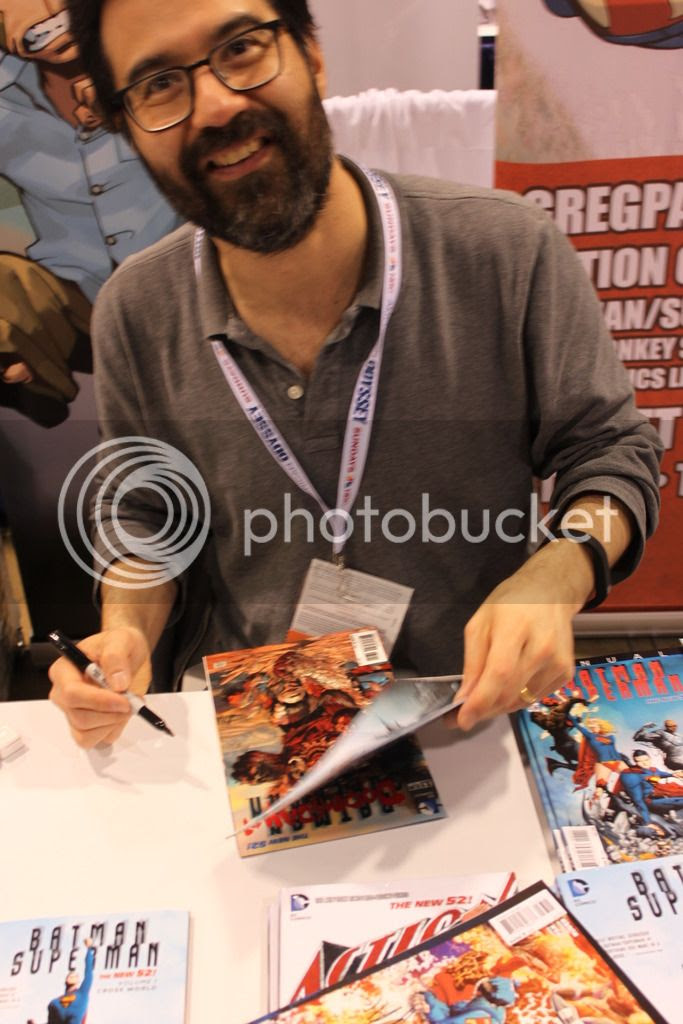 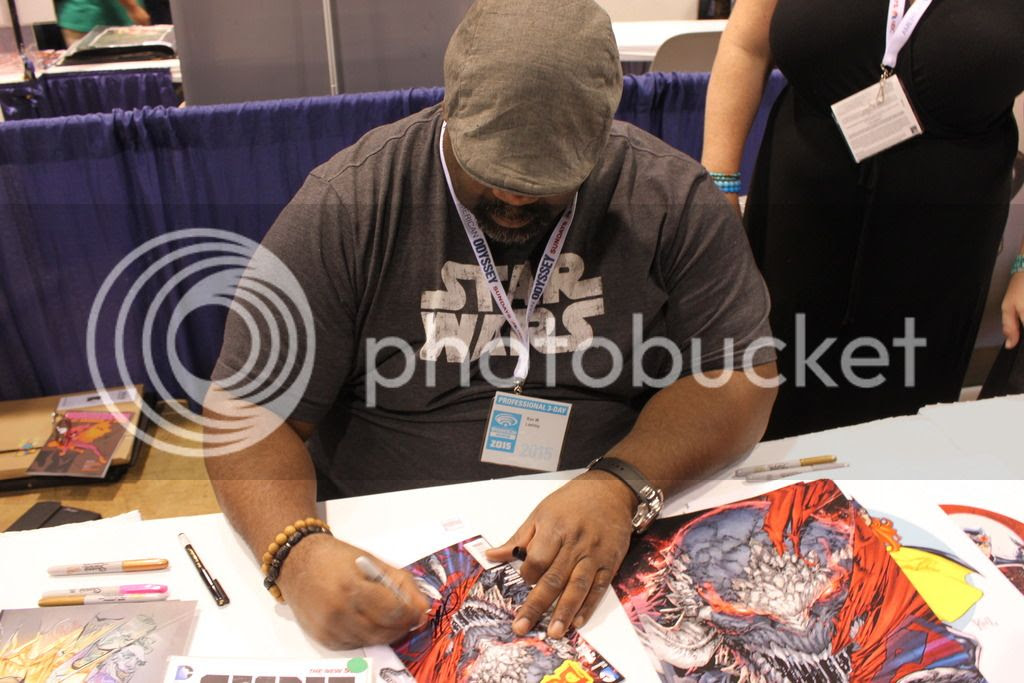 Tom King wasn't around to sign my Grayson #1 issue, but this cutie had to let us know with the signage because we never would have figured it out. 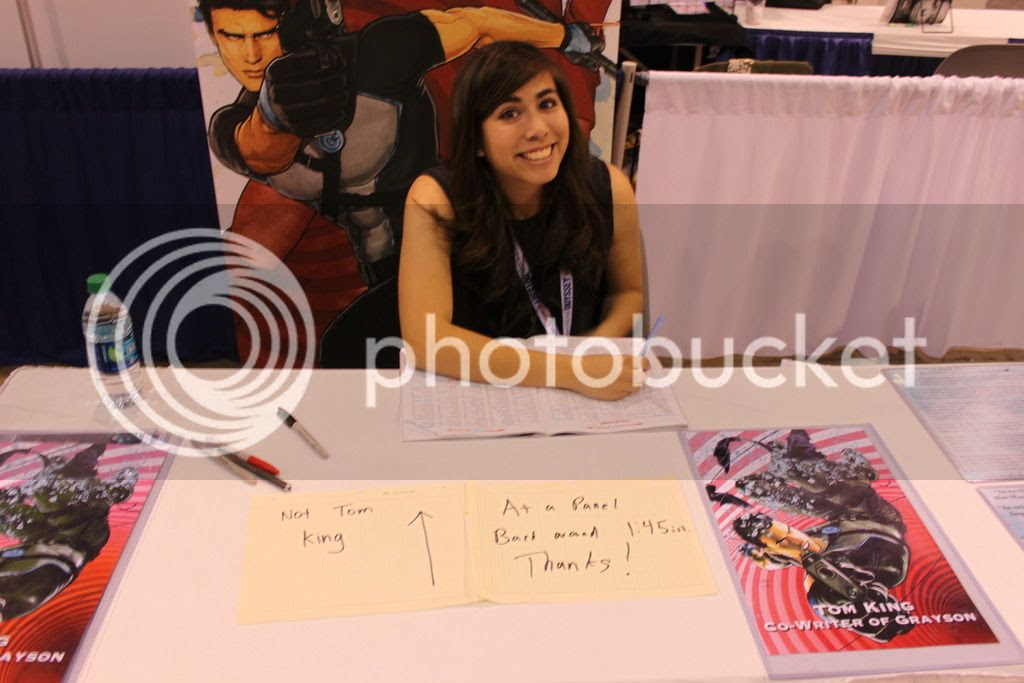 ...and then he showed up and I got my issue signed. 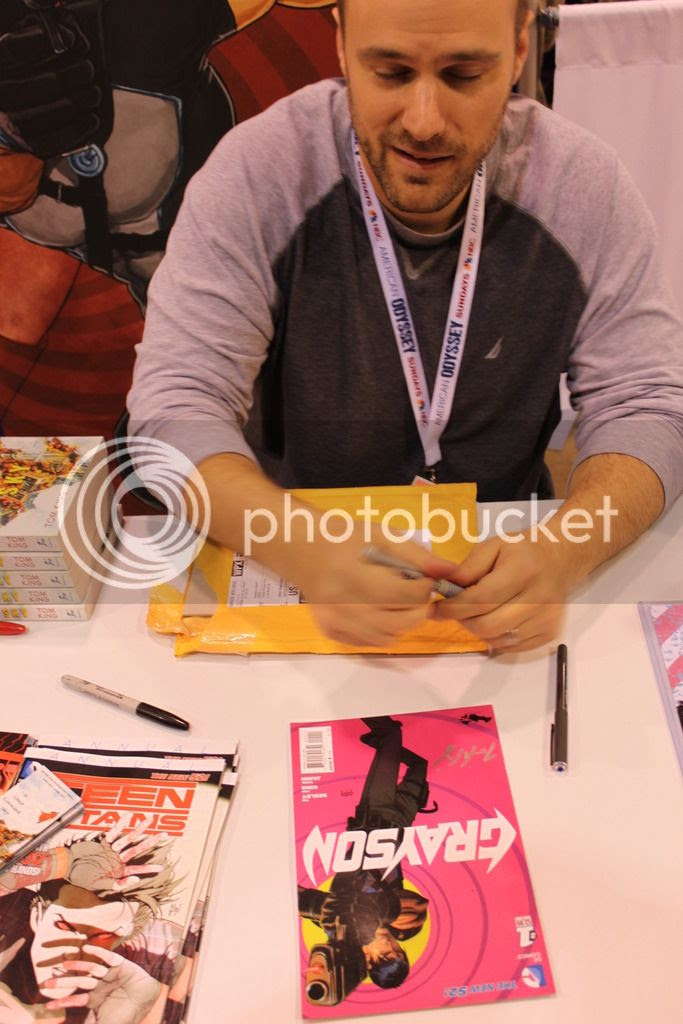 The best part about getting all these books signed was all the artists and writers were mad cool even though the lines were long.


Since I've attended a great deal of conventions, I’ve always wanted to be a part of the major DC photo shoots, and since I had a DC character cosplay, this was my opportunity to jump in. 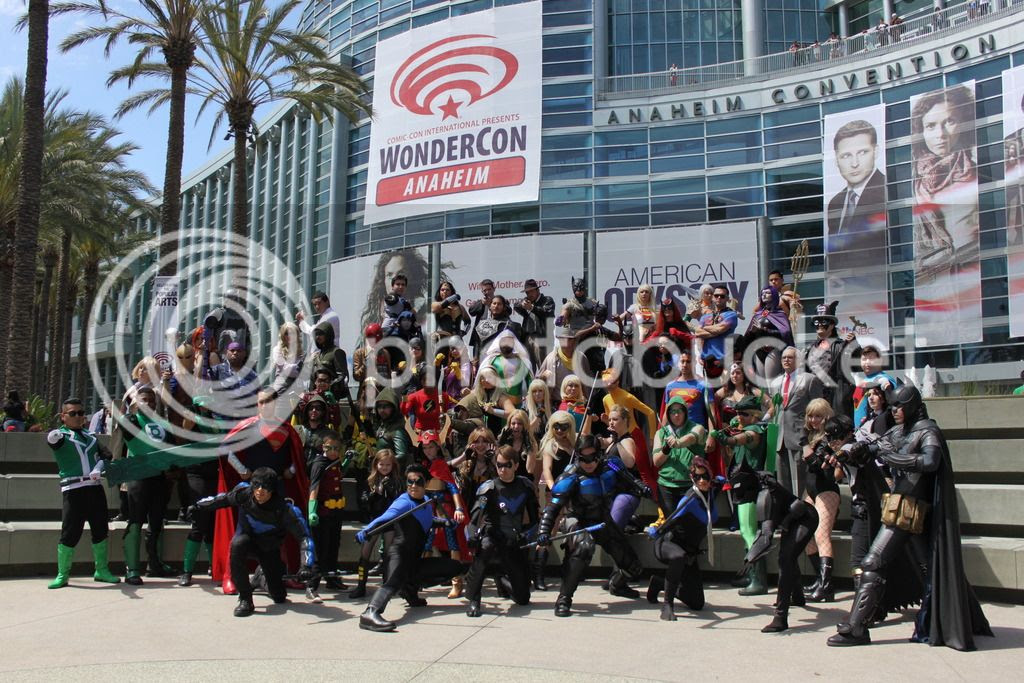 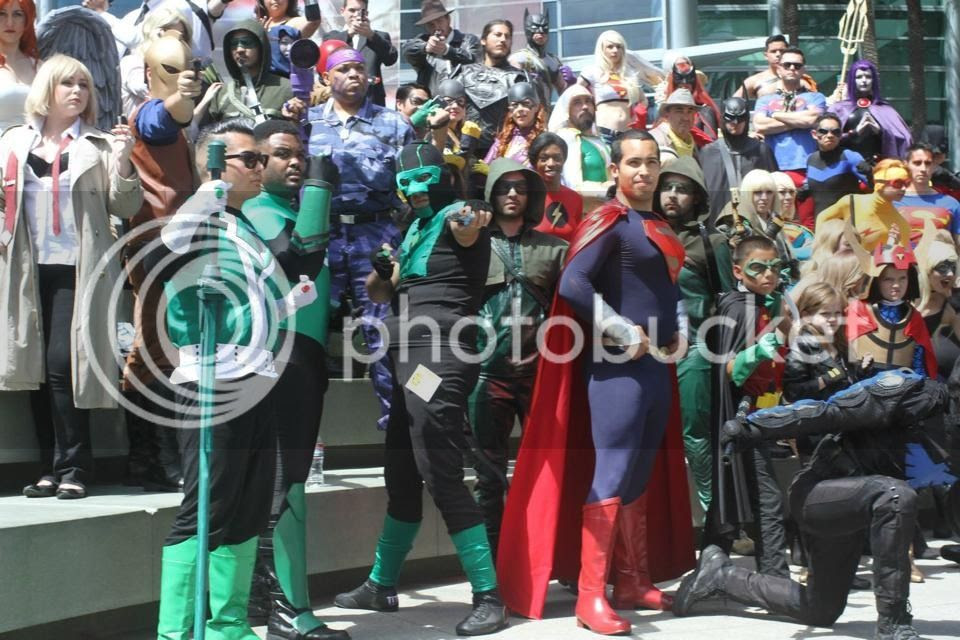 The reception for my new Indigo Lantern cosplay was okay, but not as responsive as I would have liked; there weren’t enough Lantern cosplayers, and since this particular character is kind of obscure, only hardcore DC fans and Green Lantern fans recognized me. A few people thought I was Roadblock from GI Joe or some guy from a show on the SyFy channel. When people did recognize my cosplay, it was a great feeling and made it all worthwhile to know that my vision of a character was appreciated. It was even better when we participated in Lantern-centric photo shoots. 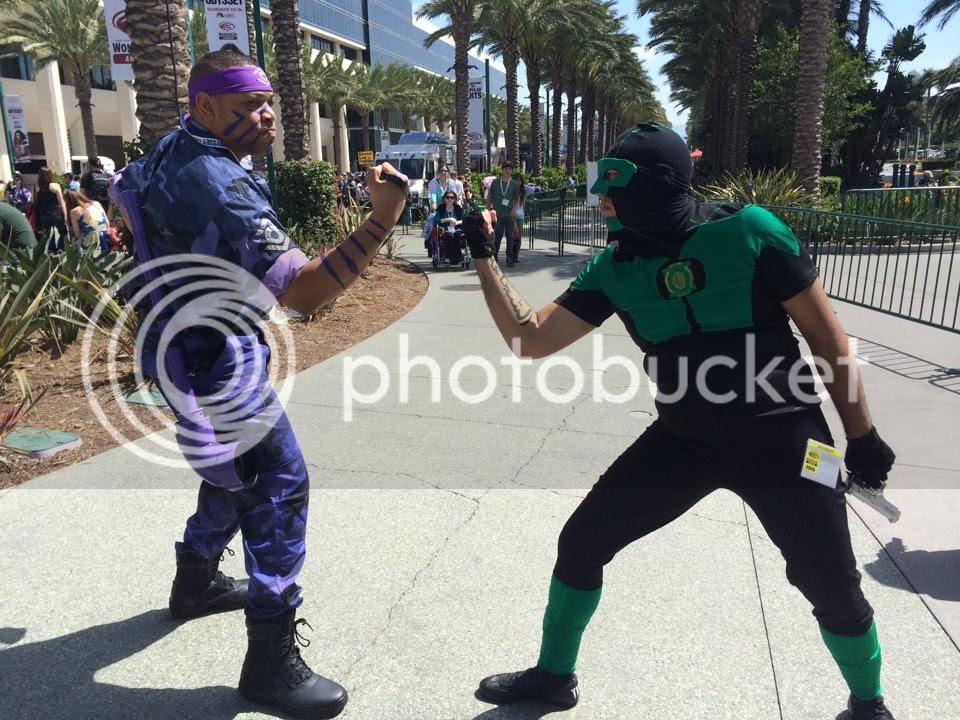 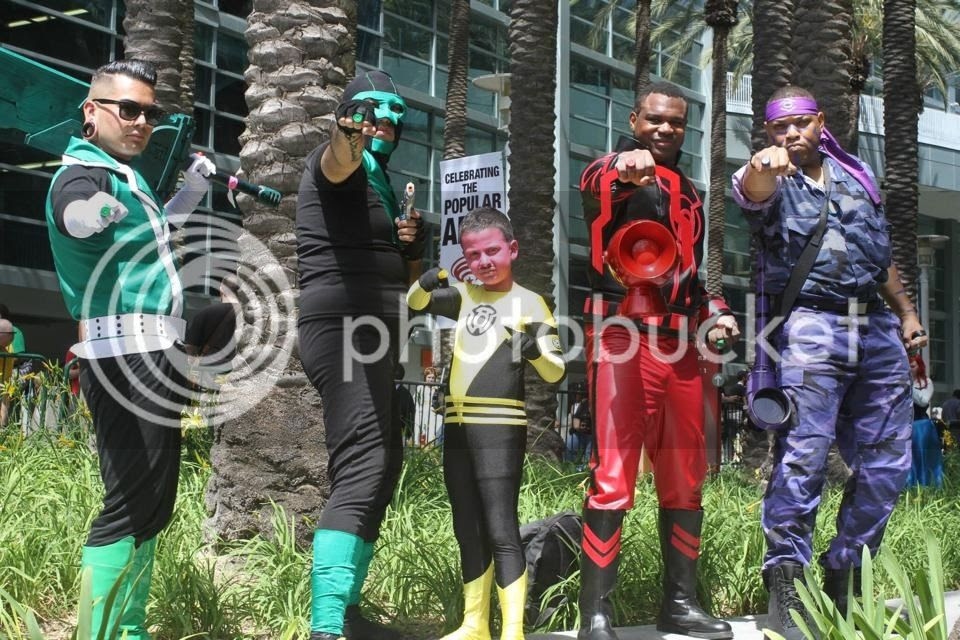 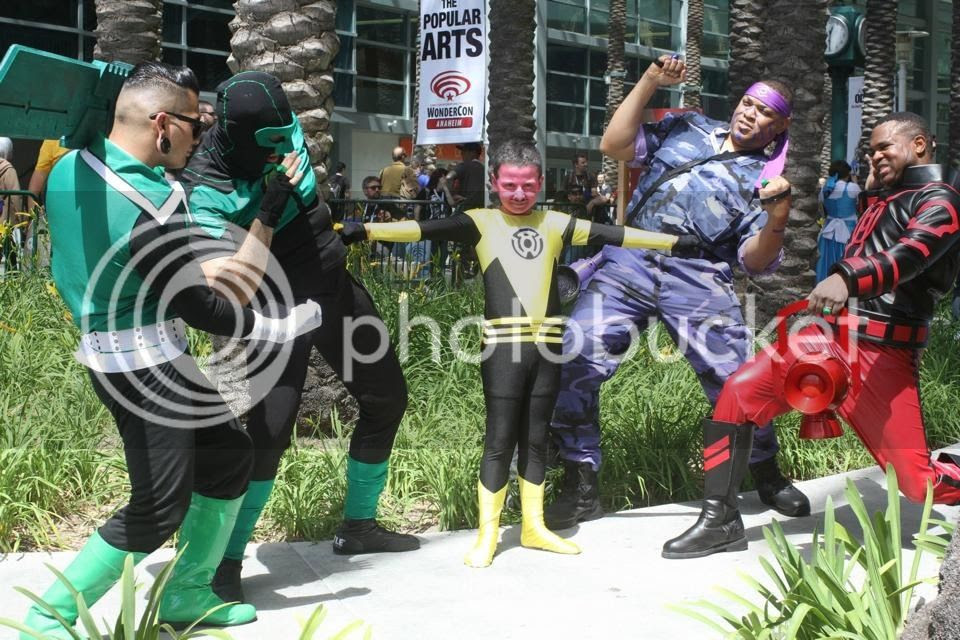 For the large gallery of cosplayers from WonderCon, please see my Facebook page:

The final verdict: If I had to give a grade to WonderCon Anaheim 2015, it would be a B/B-.

The bad:  The guest list was SORELY lacking in the *umph* department. Comparing WC’s guest list with Emerald City’s list would be completely unfair and absolutely no contest. The Superman reunion was nice and all, but it was missing General Zod (Terrence Stamp) and the original Lana Lang (Annette O’toole) to put it over the top in the coolness department. In addition, if they had signings and photo-ops for the guests that attended the panels, that would have made the show’s allure a bit more attractive. People would have literally drooled over signings for the Flash, Falling Skies and iZombie shows. Personally, I would have been all over a photo-op with Candice Patton (even though she has horizontal lines on her neck (inside joke)) and Danielle Panabaker.

The good: The venue was beautiful and glamorous and the location was ideal with everything that you could possibly want within walking distance: shopping, eateries, banks, etc. Not to mention Disneyland literally being across the street. The Anaheim Convention center was amazing with more than enough space to accommodate the event; it offered a large, theater-like arena for major studio productions and smaller rooms for other events.

In addition, they had “Gormet” food trucks lined up outside for the younger crowd. 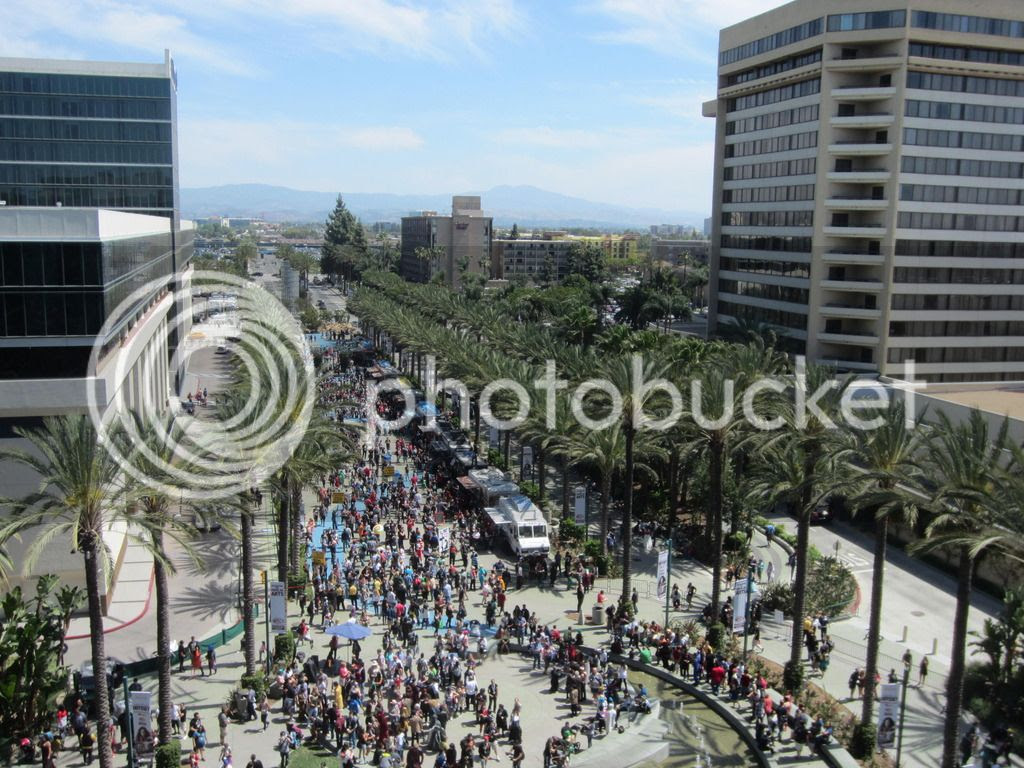 If you’re older, I would recommend getting something else to eat, unless you’re perpetually near a toilet because mud butt will be calling your name after one of those sloppy, greasy sandwiches.

From the peaks of convention euphoria to the valleys of the realization that your vacation is over, Post-Convention Depression is a condition that’s all too real. There’s even a wiki page memorializing the condition: http://en.wikifur.com/wiki/Post-con_depression
I see attending comic conventions as a temporary escape hatch from the rigors, challenges and mundane grind of regular life, so knowing that you have to go back to reality can sometimes hit hard, especially if you’ve been a cosplay rockstar for the weekend. There’s no greater feeling than having the artistry and creativity of your efforts recognized and appreciated by the masses, but for some, there’s an equal and opposite feeling of futility and hopelessness once the convention is over. The struggle is real.

Unfortunately, it was announced and confirmed that WonderCon 2016 will “temporarily” relocate to the Los Angeles Convention center because of renovation issues. Moscone, anyone? Considering this is the same drivel that we were spoon-fed when the show moved away from San Francisco, this news doesn’t exactly fill me with confidence. The least they could have done was give San Francisco a final swan song for 2016 instead of moving to the butthole of California, but I digress… Perhaps the show will move elsewhere when a Furry wanders too far from the friendly confines of the LA Convention Center and into the hood, where the locals will beat it like a Piñata.

To wrap, I have to give big ups to my squad, DJ, Mike and Scott for a great deal of the cosplay images. You can’t do this stuff by yourself, especially when you’re in costume. Until next time... 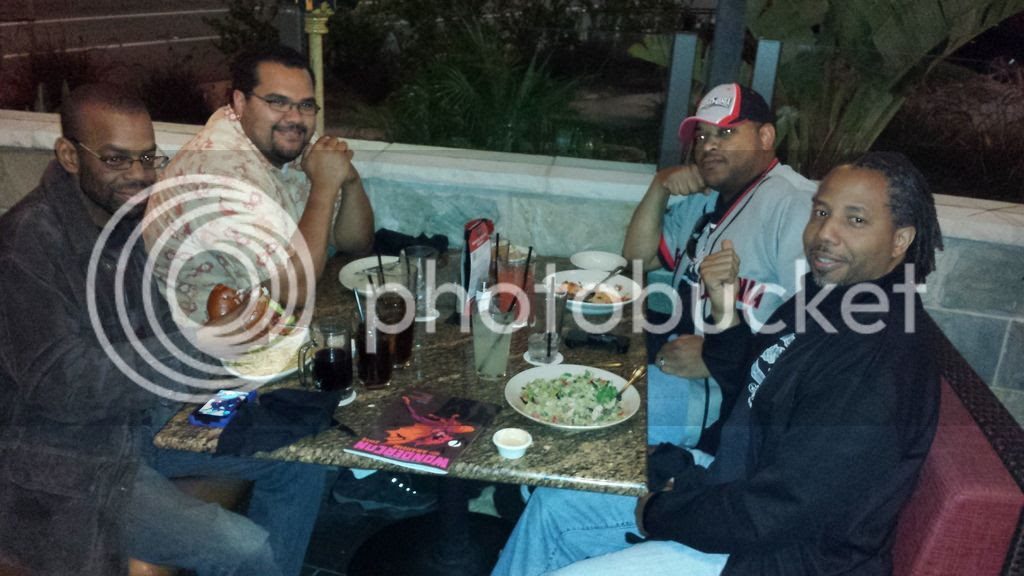